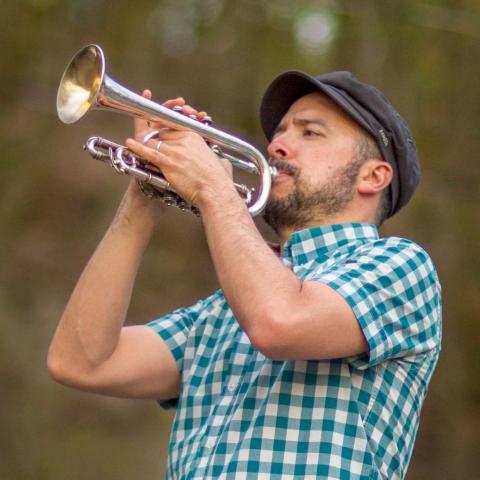 Taylor Ho Bynum is an accomplished performer, composer, and bandleader. He is the director of the jazz and creative music ensemble at Dartmouth College, where he also teaches composition and improvisation. His varied endeavors include leading his own bands (such as his long-running Sextet and his 15-piece creative orchestra The PlusTet), his Acoustic Bicycle Tours (where he travels to concerts solely by bike across thousands of miles) and his stewardship of Anthony Braxton’s Tri-Centric Foundation (which he served as executive director from 2010-2018, producing and performing on many major Braxton projects, including two operas and multiple festivals). Bynum has worked with legendary figures such as Bill Dixon and Cecil Taylor and maintains current collaborative projects with forward thinking peers like Tomas Fujiwara, Mary Halvorson, and Tomeka Reid, among others. He regularly travels the globe to conduct explorations of new creative orchestra music and has taught workshops at universities and festivals worldwide. Bynum’s writing has been published in the New Yorker, Point of Departure and Sound American, and he has served as a panelist, board member and consultant for leading arts organizations and individual artists. His work has received support from Creative Capital, the Connecticut Office of the Arts, Chamber Music America, New Music USA, USArtists International, and the Doris Duke Charitable Foundation. He received an M.A. in Music Composition in 2005 and a B.A., Honors in Music, 1998 from Wesleyan University.