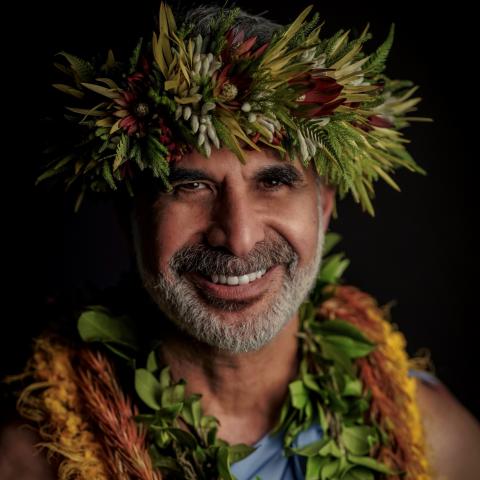 Patrick Makuakāne is a Kumu Hula, choreographer, dancer, director, raconteur and succulent fetishist, whose work crisscrosses between tradition and innovation. Born and raised in Honolulu, he studied with two of Hawai’iʻs most revered hula masters, Robert Uluwehi Cazimero and Mae Kamāmalu Klein. He received the title of Kumu Hula after a rigorous traditional ʻūniki ʻailolo conducted by Mrs. Klein in 2003. He is the founder and director of Nā Lei Hulu i ka Wēkiu, his Hawaiian dance company and cultural organization in San Francisco.  He employs dichotomy as a powerful lens to present work, confronting misconceived notions of hula. This has resulted in productions exploring the current US occupation of Hawai’i, empowering native Hawaiian transgender artists, and utilizing hula as agency for incarcerated men at San Quentin State Prison. While a passionate preserver of tradition, his artistry also crafts a provocative treatment of tradition that leaps forward in unexpected ways. In 2020, he was a recipient of a Hewlett 50 Arts Commission, supporting the creation and premier of 50 exceptional works by world-class artists. In 2019, he received a Dance/USA Fellowship for his emphasis on dance for social change, and, for a lifetime of achievement, he was given the San Francisco Arts Commission’s Legacy Award in 2018. Makuakāne is a past artistic director of the San Francisco Ethnic Dance Festival and a passionate advocate for creating equitable representation, participation and funding for the world dance community. He is also the spiritual and cultural advisor for the Native Hawaiian Religious Spiritual Group at San Quentin State Prison. His latest project is writing and choreographing a Hawaiian-themed musical in collaboration with Stephen Schwartz, musical theater lyricist and composer.