(Boston, MA) The New England Foundation for the Arts presented its Creative Economy awards on June 7 as part of the Creative Communities Exchange held in the Arts District in Portland, Maine. Supported by the Director’s Fund which was established in 2010, two awards were presented in recognition of successful strategies, scope of impact on the creative economy, and possibility for replication in other communities.  Each award came with $2,500.  National Assembly of State Arts Agencies CEO Jonathan Katz was on hand to congratulate the award recipients and address the 250 conference participants.

“Two of the most important things NEFA does is gather people together for events like the CCX and raise the visibility of excellent work.  We are proud to recognize these two remarkable efforts in our region, and want to cheer their success to date, encourage them to continue, and hold them up as examples for other communities around New England,” commented NEFA executive director Rebecca Blunk.

The first award was presented to Community Supported Art (CSArt). CSArt is a collaboration among multiple 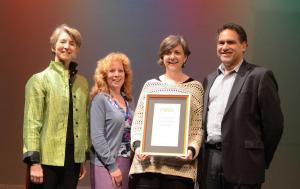 partners in Cambridge and Somerville, MA.  CSArt uses the model of community- supported agriculture to link producers--artists who develop a limited edition of an original work of art---with consumers who want to “buy local.”  Formed in 2011, CSArt is a partnership of Somerville and Cambridge Arts Councils, Local First organizations, and the Cambridge Center for Adult Education (CCAE).  The initial program included nine artists and 50 shareholders, and was so successful, with the help of a second round of funding from the MCC’s Adams Arts Grant program, CSArt was repeated this past fall.  Both rounds had people on the waiting list to buy shares.  CSArt helps emerging artists develop as entrepreneurs and integrate into the local business community, and the program raises the general public’s awareness of the work of artists in the neighborhood.

The second award was presented to the Children’s Museum of New Hampshire.  CMNH had been searching for 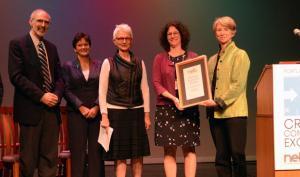 a decade for a larger space when the City of Dover invited the Children’s Museum to renovate and move into a historic armory right in the middle of town.  Over $3.7 million was raised, and the 80-year old armory was transformed into a LEED Silver certified facility.  More importantly, the Museum is now knitted into the decision-making fabric of the community.  Discussions about housing development, parking, public art, festivals, other non-profits locating in the city, economic redevelopment, and even playground design all have the Children’s Museum at the table.  Further, the Museum is involved with the Tourism Committee, Dover Main Street, the Teen Center, the police department, the Chamber of Commerce, and of course the Arts Commission---nearly every dimension of the Dover community.  The Museum is influencing conversations as a cultural organization, making sure the arts and culture are integral and central to Greater Dover’s life and future.

About NEFA
NEFA creatively supports the movement of people, ideas, and resources in the arts within New England and beyond, makes vital connections between artists and communities, and builds the strength, knowledge, and leadership of the creative sector.  NEFA is a nonprofit that operates with funding from the National Endowment for the Arts, the New England state arts agencies, and from corporations, foundations and individuals. www.nefa.org.