The New England Foundation for the Arts presented its Creative Economy awards on June 3 as part of the New England-wide Creative Communities Exchange held in Keene, NH.  Two awards - one to an organization and another for a specific project - were presented in recognition of successful strategies, scope of impact on the creative economy, and possibility for replication in other communities.  Each award came with $2,500.  National Endowment for the Arts Chairman Jane Chu was on hand to congratulate the award recipients and address the 250 conference participants.

“For almost 40 years, NEFA has engaged, informed, and helped energize the New England region through grantmaking, research and publications, online services, and convenings – like the CCX - that bring together New England’s cultural community,” said NEFA executive director Cathy Edwards as she addressed the participants at the closing session at the Colonial Theatre in Keene. “With over 30,000 cultural nonprofits, businesses, and professionals, New England’s creative economy is one of the distinguishing strengths of our region.” 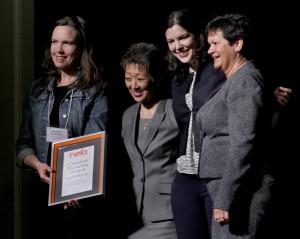 The organizational award was presented to Creative Portland of Portland, ME, to recognize the exceptional leadership and work of the organization on behalf of Portland – and Maine’s – creative economy. Creative Portland is a nonprofit that leverages, grows, and sustains Portland’s creative industries, enterprises, and workforce. As the City’s official local arts agency, they also support the artists and cultural institutions central to Portland’s identity, economy, and community. Creative Portland has led workshops at every CCX event, and partnered with NEFA to produce CCX 2013. Though they are a small organization with just 1.5 staff members, they are a favorite collaborator in Portland: they work with city government, the convention and visitors bureau, the Portland Regional Chamber, arts organizations, creative businesses, artists, and social service agencies to lead strategies and conversations regarding gentrification, the inclusion of all citizens in city development strategies, how to brand their city, how to collect data on Portland residents and visitors, and many other projects. They also run multiple local programs, including a First Friday Art Walk, the networking service 2 Degrees Portland, and run a professional development series on Business Basics for Artists. 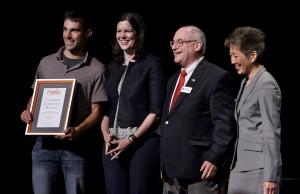 The project award was presented to the Square One Initiative of ONE Neighborhood Builders (formerly Olneyville Housing Corporation) of Providence, RI.  The Square One Initiative is an effort to comprehensively revitalize the commercial corridor of Olneyville, a low-income neighborhood on the west side of Providence, Rhode Island. Square One uses marketing, beautification, public art, and the input of community stakeholders to rebrand Olneyville Square—once known as "Providence's second downtown"—as a destination attractive to all Providence residents. The thoughtful, inclusive, long-term, grassroots neighborhood development strategies of this initiative unfold to address needs identified in a comprehensive neighborhood planning process. What started with street clean-up expanded to comprehensive branding and signage for the neighborhood, including projects with local artists such as steel cut-out lightpost banners designed by a feminist art collective located in the Square and produced by a nearby metalworking studio. Since the project began, new businesses have opened in Olneyville Square, and ONE Neighborhood Builders has generated trust and partnership with the neighborhood’s citizens and business community by keeping the money in the neighborhood and including arts projects that bring attention to the presence of local artists and designers.