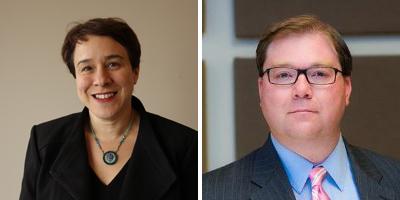 Lawrence J. Simpson, board chair of the New England Foundation for the Arts (NEFA), announced that Carrie Zaslow and Douglas Keith have joined NEFA’s board of directors.

Ms. Zaslow is a program officer at Rhode Island LISC (Local Initiatives Support Corporation) and is the former vice chair of the Rhode Island State Council on the Arts.

In her role at LISC, Carrie is responsible for overseeing the Neighborhood Development Fund, where she provides technical assistance to organizations to help them develop organizationally, fiscally, and in the programs they provide. Carrie is also responsible for the Commercial Corridors and Creative placemaking programs.  Carrie began her career in community development at the Rhode Island Commission for Human Rights, where she held the position of Fair Housing Education and Outreach Project Manager. She was later named Director of the Homeownership Connection, a division of the Housing Network of RI, where she was responsible for statewide pre and post purchase homeownership training and counseling.

A resident of Providence, Carrie holds a Bachelor of Fine Arts from Northern Michigan University in Metalsmithing, and a Master of Fine Arts from the Rhode Island School of Design in Jewelry and Light Metals. Carrie has shown her jewelry and sculpture throughout the United States and Europe. She has been an art educator, teaching from kindergarten through college level. Carrie was appointed by three Governors to the Rhode Island State Council for the Arts where she served as Vice Chair for over 10 years.  She was the co-founder of Sustainable Artist Space Initiative that brought together individual artists and community development corporations. Recognizing that artists were neighborhood assets and were being displaced as neighborhoods were being revitalized, it explored options for keeping artists in the neighborhoods both to live and work and worked to promote public policy that would support light industrial and small business that are part of the thriving makers movement in Rhode Island.  In addition, Carrie has been involved with arts advocacy through Rhode Island Citizens for the Arts.  Carrie is currently a member of the Board of Director of RiverzEdge Arts and sits on the Rhode Island Housing Resource Commission.

“I am honored to serve an accomplished organization like NEFA,” said Carrie. “I believe my addition to the board is an example of the symbiotic relationship between community development and the arts.  Arts and culture are a powerful force and NEFA plays a powerful role in how this force is used in New England and beyond.”

Prior to founding Lincolnshire Financial Advisors, a boutique advisory firm in Eliot, Maine, Doug Keith held positions with Pricewaterhouse Coopers, Mellon Financial, Delta Investment Group and Morgan Stanley. He is a graduate of Boston College where he received his B.S. in Finance in 1995. Through a combination of his financial background and passion for music composition, Doug created TunesOnTour, which helps artists connect with fans and leverage live music sales while on tour.

Doug has served as a board member, finance committee member, and Governance Chair for the American Red Cross, Great Bay chapter, as a member of the Economic Development Committee for Eliot, Maine and as Treasurer of the Kittery Point Yacht Club. He has been involved with the Portsmouth Chamber of Commerce as a member of the Business Development Committee, and is currently a Director and past Board Chair/Finance Committee Chair for 3S Artspace, a nonprofit alternative arts organization that combines midsize flexible performance space, a non-commercial gallery with affordable artist studios above, and a restaurant serving as a local hub in Portsmouth.

"Through my work planning and launching a contemporary art space, I saw first-hand the critical impact NEFA has among artists and presenters regionally, nationally, and internationally.  I joined the board to make a personal contribution to the effort to make arts a central factor informing our culture.  I look forward to working with the first class staff and board that has made NEFA such a preeminent steward for the arts," noted Doug.