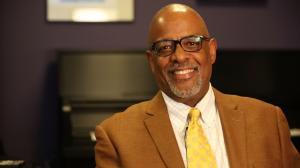 he New England Foundation for the Arts (NEFA) announced the appointment of Lawrence J. Simpson, Ph.D. as Chair of the Board of Directors.

A member of NEFA’s Board since 2006, Larry Simpson is senior vice president for academic affairs and provost at Berklee College of Music in Boston, MA, and serves as the executive producer for the Berklee Beantown Jazz Festival.  In addition to his board service at NEFA, Larry is on the board of JazzBoston, and a former Chair of the Association of Performing Arts Presenters. He has served as a panelist for the National Endowment for the Arts, Doris Duke Charitable Foundation, Heinz Foundation, Ohio Arts Council, Arts Midwest, and State of Michigan's Council for Arts and Culture, Mid Atlantic Arts Foundation, and Arts International among others. A graduate of Kent State University and received his Ph.D. in Social Psychology from the University of Pittsburgh, Larry lives in Brookline, Massachusetts, with his wife Ann; they have two grown children.

“I’m honored to serve as chair of NEFA,” Larry remarked. “I have known NEFA since my first encounter in the early 1990s via the National Jazz Network, and I’ve seen how the organization has been responsive - and even pioneering - in the field, owing to the spirit of adventure that NEFA exhibits.”

About NEFA
NEFA builds connections among artists, arts organizations, and funders, powering the arts to energize communities in New England, the nation, and the world. NEFA is a 501 (c) (3) that operates with funding from the National Endowment for the Arts, the New England state arts agencies, and from corporations, foundations, and individuals.