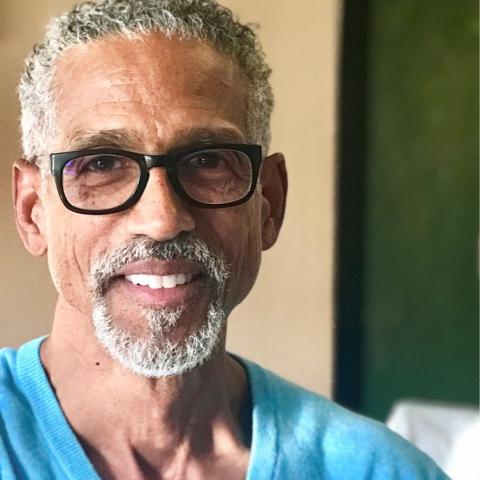 DAVID ROUSSÈVE is a choreographer/writer/director/performer, a magna cum laude graduate of Princeton University and a Guggenheim Fellow.  His dance/theater company REALITY has performed throughout the UK, Europe, S. America, and the U.S including three commissions for the Brooklyn Academy of Music’s Next Wave Festival.  Commissions include Houston Ballet, Ballet Hispanico, Cleo Parker Robinson, Dancing Wheels, Atlanta Ballet, and Ilkhom Theater Co. of Tashkent, Uzbekistan. In 2017 David choreographed Kurt Weil’s “Lost in the Stars” for director Anne Bogart, SITI company, and the Los Angeles Chamber Orchestra; as well as the piece “Enough?” for the San Francisco duet company RAWdance, a work that asks whether dance can address social movements like Black Lives Matter.  In June 2018 Enough?” was performed by Lula Washington Dance Theater at the Ford Theater.  In 2018 David’s evening-length REALITY work “Halfway to Dawn” premiered at REDCAT in Los Angeles prior to national touring from 2018-2020 including the company’s return to the BAM Next Wave Festival and to Jacob’s Pillow.  David has created three short films, the most recent screening at festivals in 11 countries and receiving 10 awards including 4 for “Best Film”. Other awards include a “Bessie”, Creative Capital Fellowship, 3 Horton Awards, CalArts/Alpert Award in Dance, and 7 consecutive NEA fellowships. David was published in collections by Bantam Press and Rutledge Press, was twice a Fellow in the Sundance Institute’s Screenwriter Lab, and just completed “Twit”, a feature screenplay based on his 2014 dance/theater work “Stardust”. At UCLA Roussève is Distinguished Professor of Choreography in the department of World Arts and Cultures/Dance.  For the UCLA School of the Arts and Architecture David has served as Associate Dean (2014-15), Acting Dean (2015), and Interim Dean (2015-17).