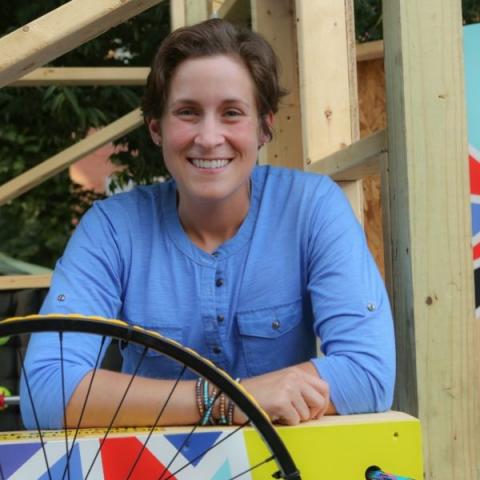 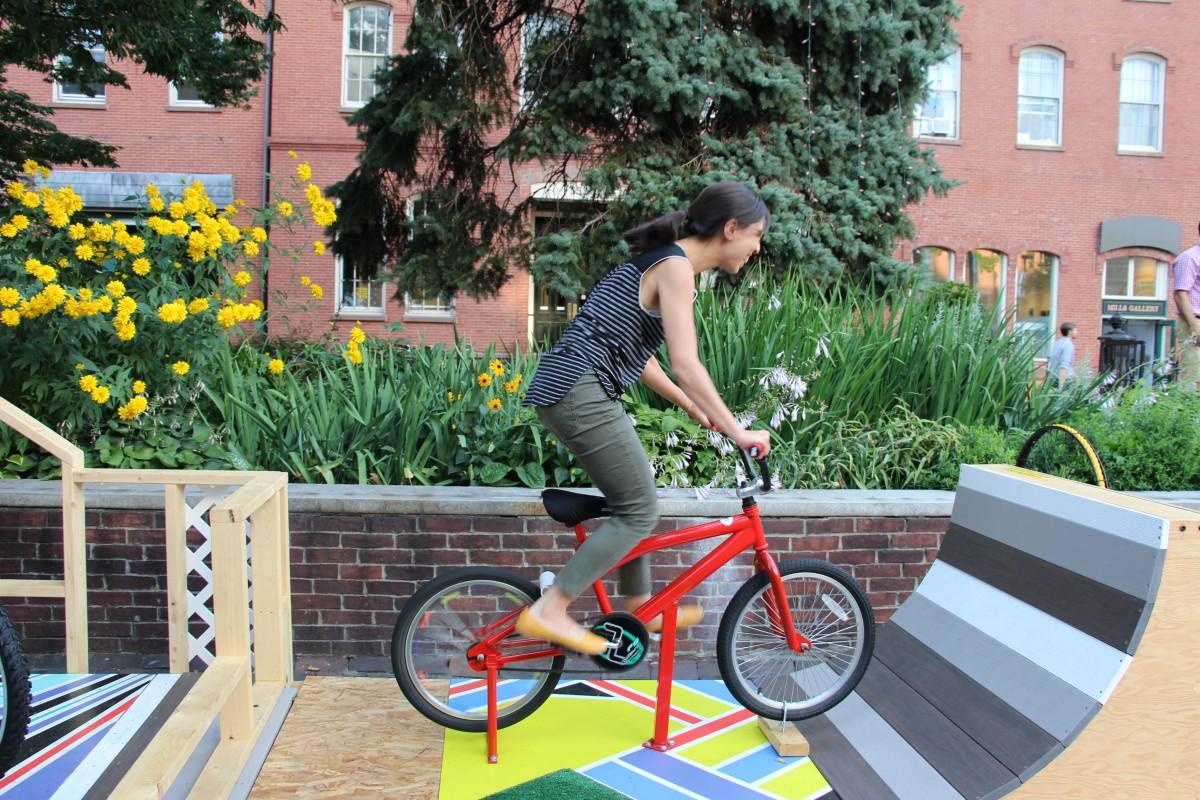 Amy Archambault was selected earlier this year for the Boston Center for the Arts’ Summer 2015 Public Art Residency, funded in part by Fund for the Arts at NEFA. Her piece, inMotion: Memories of Invented Play – a large-scale, interactive structure that invites participants to uncommonly explore one of the most ubiquitous learned activities, riding a bicycle – can be found on the BCA Plaza through October 18.

Four years ago, I set myself in-Motion to foster an artistic practice that was physically, visually and playfully explorative; one that was rooted in methods of tinkering, a fondness for materials, colors and textures, and born from vivid childhood memories of running amok and unconventional innovation; a practice that distanced itself from the new-media hungry culture around me. Coincidently, at the time, I fled from the athletic sphere where I had competed and coached for a decade, and abandoned the traditions of painting with an urgency to adapt a more physical process as an installation artist (one with a performative/theatrical flare). In the past year, my projects emerged with the intention of creating a structure and/or apparatus that revealed implied functionality or activity from its curious user. When named artist in residence (summer 2015) at the Boston Center for the Arts and presented with the challenge to create a public interactive installation, it became a reality that the work must come to life and that participants, the materials and the maker must be on the move!

Those engaged in play fascinate me; loss of inhibition, unbreakable focus, the slowing of time, a daring character. As I settled in on the Boston Center for the Arts Tremont Street plaza in anticipation to find inspiration, I became witness to children climbing along the garden’s edge and running in continuous loop. I watched pedicabs mosey on by, teenagers with BMX bikes encroach onto the sidewalks, and cyclists race across, weaving between traffic. Action became fused with the landscape and the diversity of play animated the terrain. My vision (inMotion: Memories of Invented Play) began to emerge in the form of sketches and maquettes (scale models). Hours were spent viewing YouTube highlights of individuals engaged in play and most importantly letting the landscape drive their actions. I became enchanted by the talent of Scottish trials cyclist Danny MacAskill and his work with CutMedia (The Ridge) and Red Bull in the production of Epecuén. MacAskill’s encounter with the Argentinian ruin in Epecuén was perfection. His body and actions, while at the forefront of the camera, camouflaged into the structural properties of the space. It became a necessity for me to foster these relationships between form and function and user and apparatus while the project continued to build upon personal experiences of exercise, activity, recreation engagement and fun.

As my intentions and composition became more tangible, my curiosity for materials and palette surfaced. As children, we devise and fabricate contraptions derived from our imaginations. We build these structures from improper materials for lack of a better option and with improper methods for lack of a better understanding of physics and engineering. We become fascinated with the alternative functionality of the simplest form/object. Deep down, we knew these structures for play wouldn't work to the degree that we anticipated them to, but our imagination made our ideas and motivations to build seem that much more rational or plausible. Often these structures/systems were intended for some grander performance or activity, but ultimately, the process and result ended up serving as the idea of play itself. inMotion: Memories of Invented Play exposes an artistic process and response to materials drawn from these ideas. I challenged myself to channel my inner kid (while live-role-playing as the artist-engineer); to think about shape, color, texture and how to fabricate wonder. From sourcing builder’s playscape designs, to playing interior decorator, and to taking notes on the neighborhood shenanigans, I gathered valuable pieces of visual information. Tennis balls, outdoor cushions, polycord climbing rope, astro-turf, lumber, decking, lattice, color wheels, the bicycles themselves and a palette rich with saturated primary colors complemented by accents which echoed the chosen accessories. Each section of the artwork was ultimately designed to promote a diverse offering of activities and experiences. The many components inclusive of pedaling apparatus, cycling stations, resting areas, wheel turning mechanisms that generate natural sounds reminiscent of the classic playing cards laced into rear wheels and spoke beads bring the artwork to life. 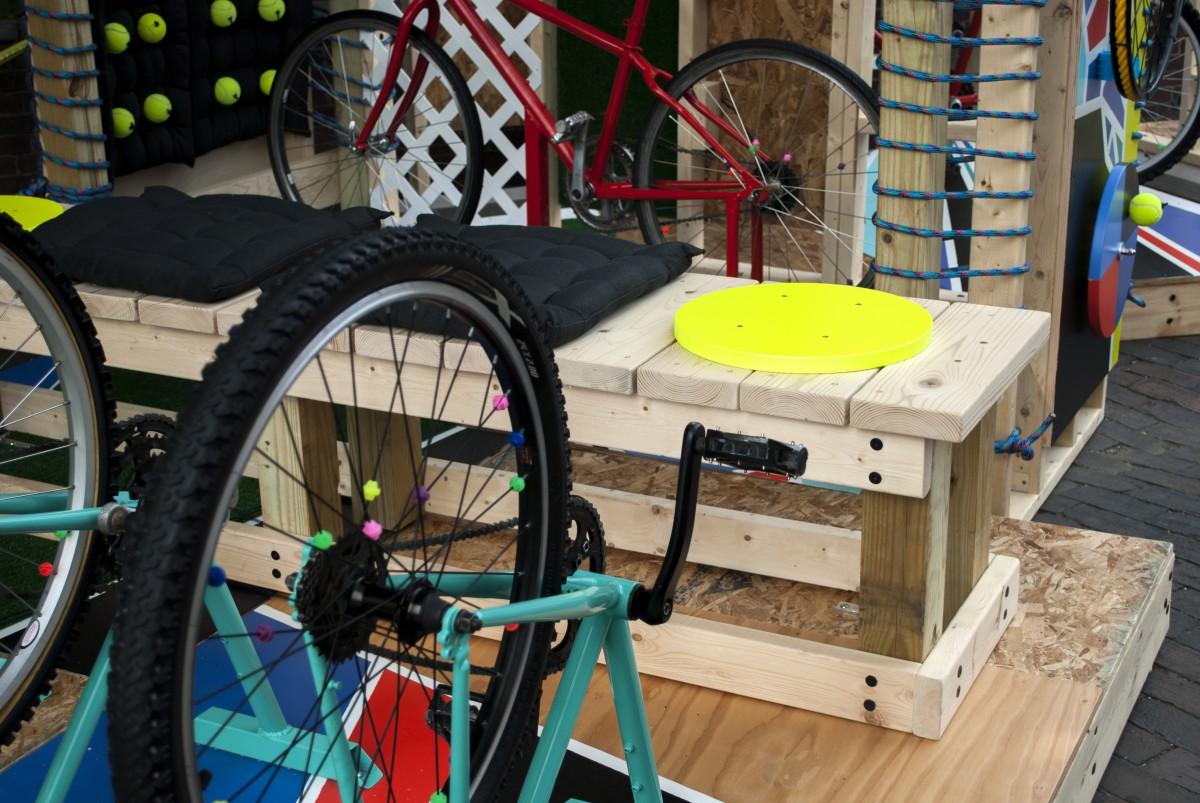 inMotion: Memories of Invented Play has generated an unpredictably wondrous response. You can’t be too sure about how the public might interact with a robustly built, physically interactive, vibrantly painted structure taking over their resting nook. And, it’s a challenge to force others to participate. That being said, Boston’s South End community has spun my artwork to life as this strange-sort-of habitat removed from the plaza that it stands upon. I have watched children turn the bench into a cave, transform a rope-laced wall into a functional ladder, and squish, pull and spin tennis ball accents. The elderly have reinvented their afternoon physical therapy sessions with a colorful twist on the pedal stations. And groups of friends can be seen riding in unison while capturing that perfect selfie snap shot. Participation has shown no limit. An artwork that was once so precious and static in the studio has certainly received some good old wear-and-tear and welcomed much use. An artist’s practice that once followed similar suite with strict rules has been redefined and recharged.

play | verb : engage in activity for enjoyment and recreation rather than a serious or practical purpose. 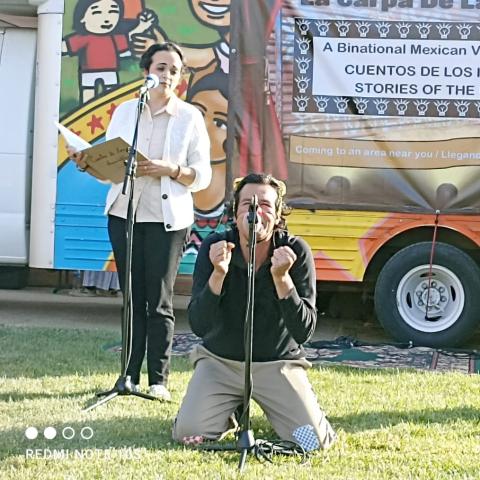