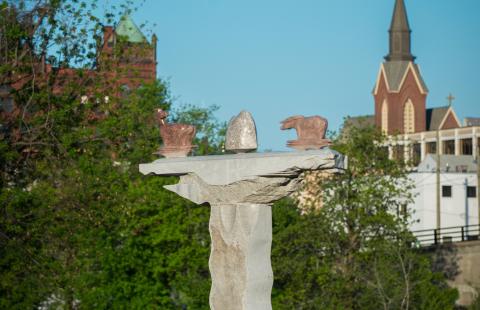 Contact Name
Kathy Hersh
Post date
December 5, 2014
Project Dates
Annually in May for three weeks since 2008
Tags
Event
The Nashua International Sculpture Symposium is an annual community event designed to elevate appreciation and involvement in public art in Nashua. Each May since 2008 three international sculptors are invited to spend three weeks in Nashua. While in Nashua, each sculptor creates a large granite or metal outdoor sculpture that is given to the City and placed in a public place for all to enjoy. The result is professional sculptures that are part of people’s everyday living. Currently, 18 sculptures are installed throughout Nashua for the public to see and touch. Nashua is the only US city with an annual international sculpture symposium.

The community is intimately involved in the Symposium, hosting the sculptors, bringing them meals, and visiting them as they work.