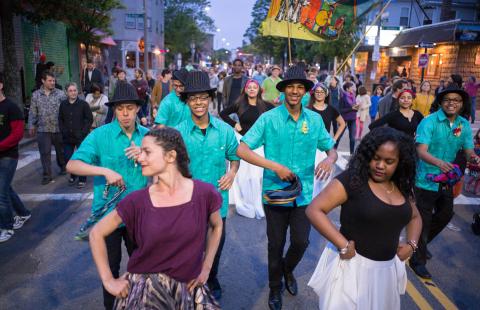 Contact Name
Kenneth Tangvik
Post date
February 9, 2017
Project Dates
July 2015 - ongoing
Workshop Leader
Creative Communities Exchange (CCX) 2017
Located on in the Hyde/Jackson Square area of Jamaica Plain, Boston’s Latin Quarter is a neighborhood revitalization project that aims to use the richness of Latino and Afro-Latino arts to create cultural and economic vibrancy. The Latin Quarter has a 60-year history of Latino immigration and 65% of the local businesses are immigrant-owned. This initiative supports local businesses through increasing foot traffic and through one-to-one consulting. The vision of the Latin Quarter is to be: the hub of Afro-Latin Arts in Greater Boston; a place for public art and lively street cultural events that enhance local businesses; and a stimulating destination place for local residents and tourists where all feel welcome, energized and engaged.