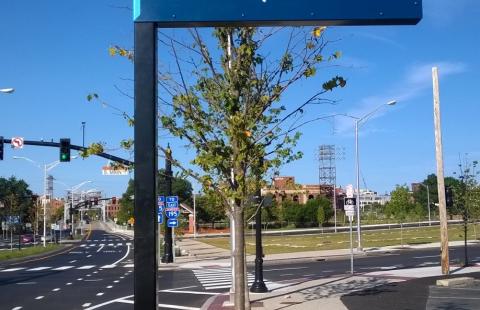 Contact Name
Joelle Kanter
Post date
December 16, 2016
Project Dates
Our committee began meeting in 2009. Signs are currently being fabricated and should be installed in the first quarter of 2017.
Tags
Marketing, Design
Several years ago, a group began meeting regularly to address the lack of a comprehensive wayfinding signage system in downtown Providence. We recognized that the existing collection of 20 green signs (which was developed as part of a plan in 2000) was inadequate, outdated, and unwelcoming for residents and visitors. Compared to well-designed, attractive systems in other cities, our signs did not leave a positive impression on visitors, and they certainly didn’t help people navigate the downtown streets or find their destinations. Together we envisioned a new cohesive signage system that would effectively direct traffic from major roadways to major downtown attractions, welcoming people and giving them a clear sense of orientation. Our new system of 76 signs is now ready for installation.