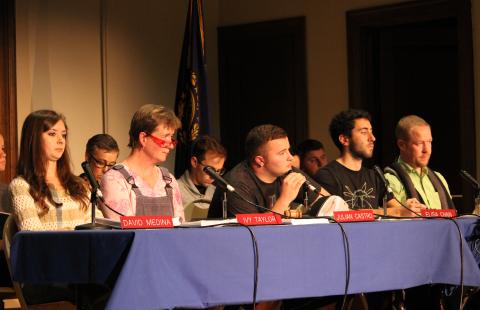 Contact Name
Sharon Fantl
Post date
January 6, 2015
Project Dates
October 11-30, 2014 Prodcution Residency and Engagement Activities; Culminating performance on October 29, 2014
"City Council Meeting" was a culminating performance to a year-long residency with New York theatre artists Aaron Landsman, Mallory Catlett and Jim Findlay. Presented by the Redfern Arts Center at Keene State College on October 29, 2014 in collaboration with the Keene Public Library, the piece itself explored empathy, civic participation, and the philosophy and practice of democracy in the form of a city council meeting. Among its strengths was its participatory nature, involving community members in its making and its presentation and empowering audiences to see and think actively about their relationships to civic engagement, other people and the political process.