Our advance trip to Indonesia for Center Stage offered an invigorating mix of the ancient and the new – sometimes co-existing and other times interacting to create an exhilarating and fresh syncretism.   Prambanan,  a world-renowned  9th century Hindu temple near Jogjakarta and the location for the photo above, was one of the venues listed on the March performance schedule for the young performers of the Hip Hop Theater Foundation.  And a slick upscale mall complete with floor displays of BMWs and lined with haute couture boutiques is the home of @America, a new cultural center created by the U.S. Embassy in Jakarta. The artists we met are mixing and matching as well. Eko Negroho, one of Indonesia’s most exciting young visual artists, is designing contemporary, comic book style shadow puppets using century’s old Wayang Kulit techniques. In a different way, the 4 year old Papermoon company (pictured above) is extending Indonesian puppetry far beyond shadow and rod traditions by turning found objects into characters  and making their own style of bunraku-like puppets. Once we tuned into this phenomenon, these kinds of “mash ups” were plentiful and thrilling to spot! 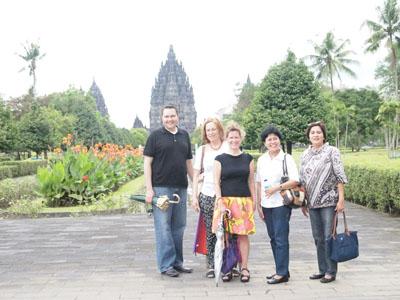